So this post is going to be something a little bit different for me. You see recently I have become something of a board game fan. Yes, I know, and you thought I couldn’t get any nerdier, what with me recently having started to play dungeons and dragons as well, but it seems you were wrong.

Anyway, for years I have been pretty much anti-board game, turning down any invitation to play things like monopoly or trivial pursuit with the kind of enthusiasm usually reserved for declining offers of amateur rectal surgery. It turns out however that my issue was not that I don’t like board games, but rather than the games I had been playing were rubbish. In the last six months I have purchased at least 11 board, card, and dice games that are actually really good fun to play. I’ve even come up with a couple of games of my own (but I’ll save talk of those for another time). As such I thought I would review some of the games I own in case you fancy giving them a play yourself.

I will say right off the bat that I am not going to be reviewing any games that I myself do not like playing. As such if you see me reviewing a game here you can rightly assume that I recommend the game and think it is worth getting. So when you see me complaining about some aspect of the game, as you will in this review, that doesn’t in anyway mean that I think it is a bad game, I am just trying to give you a full picture of the good and bad points of a game that ultimately I enjoy playing and think you would too. I’ve also never done this sort of review before so don’t expect it to be definitive in any way, or, well, particularly good for that matter. 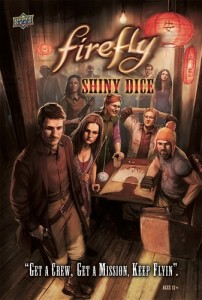 Right, with all that out of the way lets get on with it shall we. The first game I am going to be reviewing is also my most recent purchase (I got it yesterday), and that’s Firefly: Shiny Dice, created by Scott Morris and published by Upper Deck Entertainment. As you can no doubt guess from the title, this is a dice game based within Joss Whedon’s excellent Firefly universe. The aim of the game is pretty much what you would expect from a game set in the verse. You get a crew, take a mission, and aim to keep flying as long as possible. At the end of three rounds the player who has managed to accumulate the most points and cargo is the winner.

The game comes with fifteen dice; seven outlaw dice (brown), three passenger dice (white), and five bad guy dice (black). At the beginning of your turn you roll all of these dice in order to establish your crew (the combination of the outlaw and passenger dice) and which bad guys you will be up against (the gangster Niska, seductive con-woman Saffron, and “businessman” Badger).

Each of your crew dice has a special ability that allows you to combat the bad guys, and in turn each bad guy causes problems for you in different ways. When you use one of your crew dice it is moved to the KO pile and effectively removed from the game. If you manage to defeat the bad guys you have to choice to roll your remaining crew dice and the bad guy dice again to see if you can defeat them a second time with a smaller number of dice, or you can end your turn and keep what every points and supplies you have earned thus far. As such the aim is to take out all the bad guys using as few of your crew dice as possible so that you can just keep flyin’. Every time you take out a bad guy you get points, but you only get to keep those points if decide to end your turn. If you fail to defeat the bad guys then all the points you have in the pot up to that stage are lost.

There are also mission cards that can supply you with bonus points, abilities or force you into a course of action you may not have chosen otherwise. Missions are completed by having dice that match the symbols displayed on the mission cards. 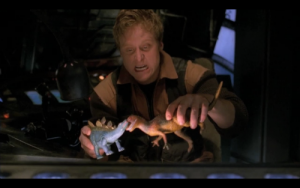 The rules aren’t at all clear. I had to go online and watch a video on YouTube to work out how to play the game because the rules seem to skim over a couple of cruitial details. That said, once I knew how the game was meant to be played I went back and re-read the rules and the things they do cover they cover fairly well. The game has a fairly steep learning curve, and as such the gaps in the rules are more problematic than they could be with other games. But once you know things like “each bad guy dice represents a hit point” it does all fall into place fairly quickly. I will say that I recommend approaching the game in a systematic way. There are lots of steps involved and even after playing it a few times it is possible to forget one or two of them. Making sure you work through each step in turn, even if it doesn’t really apply at that moment in time, is the best way I found not to get lost.

Though the game can apparently be played with up to five players, I really don’t see how more than two is in any way practical. As a round can involve multiple missions it is more than possible for an individual player’s turn to last up to ten minutes. As such with five players it is entirely possible that you could spend a good half hour just waiting for it to be your turn, which just doesn’t sound fun to me. But hey, I haven’t tested this theory so I can’t say for sure.

The game can also be played as a single player game. While this makes more sense to me I really can’t see it being as much fun. Yes, you have the challenge of trying to beat your previous score, but seeing so much of this game relies on chance rather than skill I feel that you need another human to play against to really make it enjoyable. Not really sure this is a point against the game in any way though.

The mission cards do feel like the add on they apparently are. According to Scott Morris, the games creator, the mission card were something the publishers added after he sold them the game idea, and it does feel like it. More often than not missions fail immediately and thus have little affect on the rest of your turn. In fact it is possible to remove the mission cards entirely from the game and have it play pretty much identically. Not saying there is anything wrong with them, they just aren’t necessary.

Another unnecesary component are the screens for hiding your points. I get the thinking behind them, that if you can’t see how many points someone else has you might be tempted to press your luck more to make sure you beat them, but in reality they just aren’t needed. Simply keeping your points and supplies in a nice little pile accomplishes the same thing, plus I had enough trouble keeping track of how many points I had, let alone those of other people. Again, there is nothing wrong with having the screens, they just don’t really add anything to the game and can be removed without having any affect on how it plays.

It is kind of hard to tell the difference between Mal and Zoe dice. This is a small gripe, as are all those listed above, but it did result in a couple of grumbly moments where one or other of us thought the other was making a move they weren’t allowed to do. 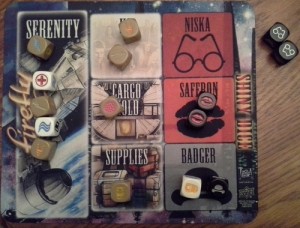 This is a deep, involved game that offers a good deal of challenge, variation, and replay value. While you will likely spend the best part of your first few games continuously checking the rules, once you get the hand of things it becomes very much about coming up with the most strategic plan possible given the dice fate has landed you with.

The game mats are cool. That’s it really, I liked the game mats, they look good and are a nice addition. I mean there is no reason you couldn’t just play this game on a table top, separating the dice out into different groups as required. But having the mats makes this much easier and, well, they just look good.

It feels like Firefly. Yeah, I know, it’s a dice game and so could have pretty much any theme at all and still play the same, but there is something about it being Firefly themed that just seemed so right to me. You always feel like you are up against the odds and the urge to keep going, even when you really shouldn’t, is strong. That is very much what Firefly was all about. Plus I can easily imagine the crew of Serenity playing a game like this, it just fits with the frontier, east meets west aesthetic the show had. It is also clear to me that it was created by someone who loved and got Firefly.

It made me remember how much I love Firefly, so gonna have to watch the whole series again some time soon.