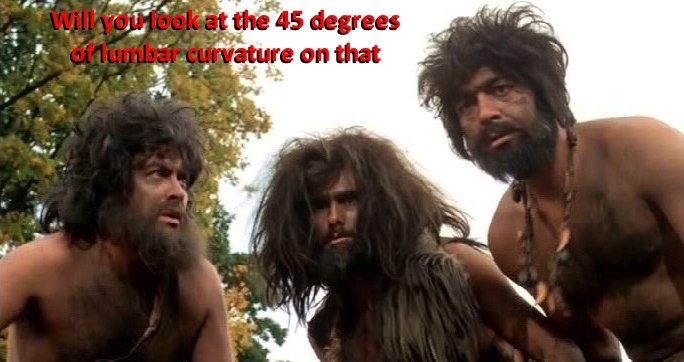 Take this latest example from the Univeristy of Texas. They are announcing the amazing discovery that the reason men like certain shaped bums on women is due to evolution.

A psychology study from The University of Texas at Austin sheds new light on today’s standards of beauty, attributing modern men’s preferences for women with a curvy backside to prehistoric influences.

The study, published online in Evolution and Human Behavior, investigated men’s mate preference for women with a “theoretically optimal angle of lumbar curvature,” a 45.5 degree curve from back to buttocks allowing ancestral women to better support, provide for, and carry out multiple pregnancies.

“What’s fascinating about this research is that it is yet another scientific illustration of a close fit between a sex-differentiated feature of human morphology — in this case lumbar curvature — and an evolved standard of attractiveness,” said the study’s co-author David Buss, a UT Austin psychology professor. “This adds to a growing body of evidence that beauty is not entirely arbitrary, or ‘in the eyes of the beholder’ as many in mainstream social science believed, but rather has a coherent adaptive logic.”

I know, you thought that standards of attractiveness were generally the product of the culture and society in which we live, so did I. But no, according to this study, they are the result of evolutionary pressure acting on our ancestors 10,000 years ago in the wilds of Africa. Who’d a thunk. But ok, let’s be fair, let’s hear them out. How was this discovery made?

About 100 men rated the attractiveness of several manipulated images displaying spinal curves ranging across the natural spectrum. Men were most attracted to images of women exhibiting the hypothesized optimum of 45 degrees of lumbar curvature.

Er ok, really not seeing how this demonstrates an evolutionary rather than social/cultural explanation, but fine. Carry on.

The second study addressed the question of whether men prefer this angle because it reflects larger buttocks, or whether it really can be attributed to the angle in the spine itself.

Approximately 200 men were presented with groups of images of women with differing buttock size and vertebral wedging, but maintaining a 45.5-degree curve. Men consistently preferred women whose spinal curvature was closer to optimum regardless of buttock size.

“This enabled us to conclusively show that men prefer women who exhibit specific angles of spinal curvature over buttock mass,” said the study’s co-author Eric Russell, a visiting researcher from UT Arlington.

Now this is a fairly interesting finding. The fact the buttock size had no significant effect on the results surprises me, but regardless, I still don’t see what this has to do with evolution, will someone please explain it to me?

“This spinal structure would have enabled pregnant women to balance their weight over the hips,” [David] Lewis [lead author and UT Austin alumnus and Bilkent University psychologist] said. “These women would have been more effective at foraging during pregnancy and less likely to suffer spinal injuries. In turn, men who preferred these women would have had mates who were better able to provide for fetus and offspring, and who would have been able to carry out multiple pregnancies without injury.”

This morphology and men’s psychological preference toward it have evolved over thousands of years, and they won’t disappear over night.

“This tight fit between evolutionary pressures and modern humans’ psychology, including our standards of attractiveness, highlights the usefulness that an evolutionary approach can have for expanding our knowledge not just of the natural sciences, but also the social sciences,” Lewis said.

I’m sorry, I am just going to read through that again, because it seems I missed the part where they demonstrated any evolutionary connection between their test subjects’ preference and the shape of women’s bums and backs? I also seem to have missed the part where they demonstrated that this preference dates back thousands of years and is not the result of the culture or society of the, undoubtedly, twenty-something psychology students involved in the study. And apparently I wasn’t paying any attention at all when they showed that this particular degree of spinal curvature has any effect on how likely a women is to suffer spinal injury or how effectively they can forage whilst pregnant.

Nope, just read it again, the evidence to support their claims is just not there. Now admittedly this is just a press release and not the full paper (which I don’t currently have access to), so it is possible they cover all of these points there (though the abstract doesn’t fill me with confidence that they do). But as far as I can tell from the press release their entire study seems to have been looking at what shape bums men prefer and then taking their results and drawing the unsupported conclusion that women’s bums must have evolved this way because it must make them healthier because otherwise why would men like them??? Sorry, but that sounds like just another Just So story to me.

Homeopaths do not have a physical brain, but merely 'skull water' with the memory of brains~Robin Ince